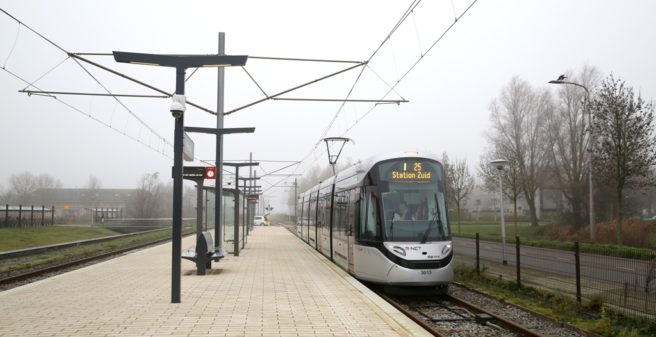 After an interruption of almost two years, Amsterdam’s Amstelveenlijn started again passenger operation over the full length of the route on 13 December 2020: A new line 25 was introduced between Station Zuid and Amstelveen Westwijk using the new CAF low-floor tramcars. Bus substition service was discontinued. Due to the Corona crisis, there was no public opening event. However, the opening ceremony at Legmeerpolder depot could be followed on the internet and the stops were decorated with banners.

Construction works were complex and included the separation of the Amstelveen line from the metro network, the lowering of the platforms of the former express tram line 51, three new underpasses at the stops Kronenburg, Zonnestein and Sportlaan, the eliminaion of five stops (De Boelelaan, Amstelveen Centrum, Marne, Gondola and Spinnerij), the relocation of the stop A. J. Ernststraat stop, a complete renewal of the stop furniture and construction of a depot facility in Legmeerpolder, including a 500-metre access track from the Westwijk terminus. Already back on 26 August 2019, the section up to Amstelveen Stadshart (formerly Binnenhof) had been converted to tram operation as line 5, see: https://www.urban-transport-magazine.com/en/the-new-amstelveenlijn-in-amsterdam/

The new route 25 is the only GVB tram line which is part of the so-called “R-Net”, which basically provides interurban connections. The new CAF low-floor railcars run in coupled pairs – they were presented in UTM already here:

The second vehicle of each tram set is equipped with a seating conductor in the front cabin for service and ticket sales. During rush hour, line 25 runs with eight coupled trams every 7½ minutes. During the day there is a 10-minute frequency and a 15-minute frequency in the evening on all weekdays.

Total investment cost of the conversion of the Amstelveenlijn to low-floor operation is approximately €300 million. Until 2024, construction work will continue on the almost five-kilometre extension of line 25 to Uithoorn, with two intermediate stops and a terminus at the old station building.

A network scheme of GVB Amsterdam’s tramway can be found here: http://urbanrail.net/eu/nl/ams/tram/amsterdam-tram.htm