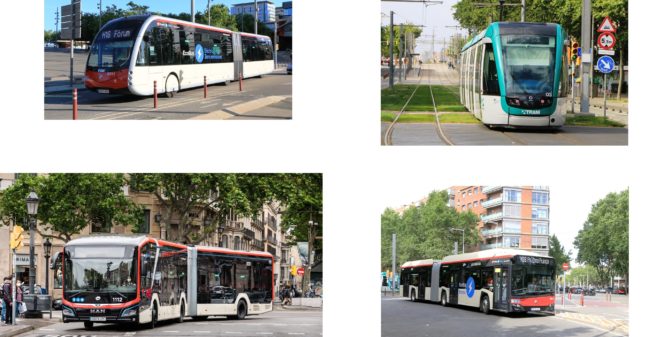 Swift and silent: Barcelona’s electric buses are already running on the streets of the city on the Mediterranean for wuite some time.

TMB (Transports Metropolitans de Barcelona) is one of the pioneers in electric bus operation in the country: the first two Irizar i2e solo cars already started revenue service in 2015, and in 2016 the first two Solaris Urbino electric 18 III articulated cars joint the fleet. These have roof-mounted current collectors (pantographs) for opportunity charging during the day. Fast charging poles were installed at the Zona Franca terminus on line H16 and later at the second terminus of the same line – at Forum. Polish manufacturer EKO Energetyka was carrying out the installation of the equipment.

In 2018, three Solaris Urbino electric 18 IV in the current revised design came to TMB, together with four Irizar ie Tram 18 articulated electric buses in the distinctive “tramway style” design. Currently, 14 more Solaris and 9 more Irizar articulated vehicles are in the process of delivery – read our report here: https://www.urban-transport-magazine.com/en/barcelona-more-battery-electric-articluted-buses-from-solaris/ . In addition, 8 fuel cell buses of the type City Gold from the Portuguese manufacturer Caetano will be supplied to Barcelona this year, alongside 46 gas hybrid buses from Mercedes-Benz and MAN.

Before that, TMB had already purchased larger series of hybrid buses, and even a series of diesel buses were converted into hybrid buses – we will report on this elsewhere. Remarkable, too, are the three Van Hool ExquiCity double-articulated hybrid buses that have been in service with TMB since 2014.

Tenders are currently being invited for a further 78 electric buses – for delivery by 2022/23. 29 of these will again be articulated e-buses, which will allow the complete conversion of lines H16, H12 y V15 to e-bus operation. Additional charging poles will be installed at the termini of both lines H12 y V15. The remaining 49 e-buses of the tender are 12-meter vehicles. In addition to the 78 electric buses, another 85 gas-hybrid buses, 23 gas-only buses, and 24 diesel-hybrid double-deckers for used on the city’s touristic round-trip services will be purchased.

From the beginning of July 2021, electric bus operation on the H16 line include one of the two pre-production MAN Lion’s City 18E articulated e-buses – the second is operating in Cologne, we reported here: https://www.urban-transport-magazine.com/en/first-cologne-then-barcelona-nuremberg-uppsala-mans-new-fully-electric-articulated-bus/ . It is equipped with two e-motors with a nominal power of 320 kW and has 8 battery modules with a combined storage capacity of 640 kWh. The MAN Lion’s city 18E is only charged overnight at the depot (charging time 4h) and should be able to cover at least 200 km without recharging.

The importance which the bus electrification programme has for TMB is also clearly visible by its participation in the European projects ZeEUS (Zero Emission Urban bus Systems) and ASSURED. As part of ASSURED, the interoperability of pantograph charging was demonstrated during spring 2021 through the use of various models. A VDL test bus was was there, among others.

The tramway is also being expanded

The long-term planning process to connect Barcelona’s two isolated tramway networks – called Trambaix and Trambesòs – is also gaining speed. The Catalan regional government is subsidizing the construction of the first section of the future link by EUR 38 million. This first section, 1.8 km long, along Avinguda Diagonal and between Glòries and Verdaguer stations is currently being tendered for construction and is scheduled to open in 2023, with the extension to Francesc Macià by 2025. Catenary-free operation is currently being examined. At the same time, at the request of the city council, TMB is setting up a bus line on separated bus lanes between the two tramway termini at Glòries and Francesc Macià, although this will mainly use smaller streets and run directly along Avinguda Diagonal. Nevertheless, total travel time is expected to be just 10 minutes. There will be no impact on the future tramway connection between both termini, government officals say.

Other tramway extensions will follow. This includes the Laureá Miró and Sant Feliu de Llobregat – Quatre Camins sections of the T3, an extension of the T4 from Sant Adrià to Port de Badalona, and a new, separate line between Cerdanyola University and Montcada. All projects are included in the current infrastructure plan until 2030 (Plan Director de Infraestructuras de la región metropolitana de Barcelona PDI). To operate these new extensions, a tender is being prepared for 36 new low-floor tramways to supplement the current fleet of 41 Alstom Citadis 302.