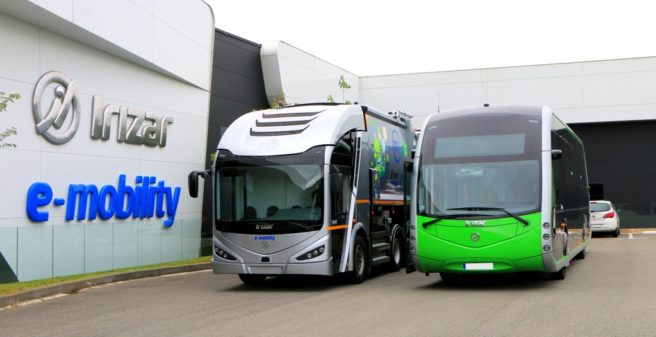 Building a completely new factory to the latest standards exclusively for electric buses – that took a fair amount of courage just a few years ago. Irizar Group based in the Spanish Basque Country was brave enough to take this risk and it seems that it is paying off.

UTM was given the opportunity to visit the facilities in Aduna near San Sebastian/Donostia and to get some insights. Imanol Rego, General Manager at Irizar e-mobility, and Aiora Contreras, Head of Communication  and Public Relations of Irizar e-mobility, provided information regarding their concept, the models, the company’s prospects and, last but not least, their view on the current e-bus market in Europe.

Irizar e-mobility is a wholly owned subsidiary of Irizar Group, which itself is organized in the form of a cooperative – a concept that is quite common in the region and, among other factors, results in a very strong commitment and identification of the employees with their company and its targets. Irizar has been known in the country for more than 130 years, primarily as a coach builder, and still has leading market shares in the national coach and intercity bus business today. The group consists of the eight companies Irizar, Irizar e-mobility, Alconza, Datik, Hispacold, Masats  Jema and Creatio, with a total of 13 production sites.

When it comes to electric mobility, the group ventured into a completely new field – one in which Imanol Rego clearly sees the future for the city bus market. “In a few years, e-buses will very much dominate the market; buses with combustion engines will only play a much smaller role in the long run.” Irizar began developing “electric power train solutions” for city buses back in 2011, at a time when most industry suppliers were still several steps away from such a development. In 2014, the first e-buses were delivered to customers and in 2016 “Irizar e-mobility” was founded as an independent group company. In 2018 the new factory in Aduna, built entirely according to the latest eco-sustainability standards, was finally inaugurated. It is  the first factory in Europe built exclusively for the production of e-buses. The 18,000-square-meter facility currently has a production capacity of approximately 650 vehicles a year and can be rapidly increased to up to 1,000 units, if needed.

The two electric bus series share the technical platform, but differ quite substantially in the design. While the ‚ie bus‘ series look more like classic bus models, the ‚ie tram‘ is providing cutting edge design and clearly makes reference to the design of contemporary low-floor streetcars. Not surprising ‚ie tram‘ is mostly used at BRT systems (Bus Rapid Transit) – bus routes with a high proportion of dedicated routes and a preference on traffic signals. This ensures largely fast, trouble-free travel comparable to tramway and light rail systems.

However, both model series have unique design patterns, which are not based on existing diesel bus models. “The intention is to clearly emphasize – by means of the exterior and interior design – the paradigm shift which represents the trend towards wider use of electric mobility in public transport. We talk about ‘organic design’ – the use of organic, sustainable materials is a key feature of our production,” says Imanol Rego. “Passengers clearly perceive this new approach positively, our vehicles very much attract attention, especially passengers compare them with traditional diesel bus models”, adds Aiora Contreras.

The ‚ie bus‘ model is offered in four different lengths: the two-axle vehicles at 10.62 m and 12.16 m, a three-axle version at 14.83 m and an articulated vehicle at 18.73 m. Boarding and door arrangement as well as the interior layout can be varied and adapted according to customer requirements. The ‚ie bus‘ follows a distinguished e-bus design concept of its own, but is more closely linked to conventional city bus models than the ‚ie tram‘:

In comparison, the ‚ie tram‘ models clear resemble state-of-the-art tramway models and  therefore attract even more attention. The ‚ie tram‘ is offered in lengths of 12.16 m and 18.73 m.

Unconventional components are also very much prominent in the interior of the vehicles, such as the additional window located underneath the normal windows on each side, the wooden floor layout in contrast to the metallic seats, the partially transparent design of the articulated portals and several other features. The slanted front section is visually very striking and although it allows for a smaller front entrance door, this is usually not considered as relevant especially in BRT systems without passenger check-in by the driver.

The latest version, developed in response to a special customer request, can be seen as an intermediate model that will be offered to other customers in the future: These are vehicles have a modified ‚ie bus‘ body (with double-width front entrance door), but are additionally equipped with various design elements of the ‚ie tram‘ including the additional window located under the normal side windows. The Bulgarian city of Burgas has ordered this model, and the first units are to be delivered as articulated units in September 2021.

All two-axle models have a e-motor power of nominally 180 kW, the three-axle and the articulated vehicles of 240 kW. Battery capacity is max. 350 kWh for the two-axle units, max.  490 kWh for the 15m- three-axle unit and max. 525 kWh for the articulated units. Irizar uses lithium-ion batteries, which are manufactured in-house in a dedicated facility adjacent to the main plant. This manufacturing facility is also brand new, having only been inaugurated in September 2020. With a new generation of batteries a substantial capacity increase is expected in the short run.

• Fast-charging (Nano Pack): The load can be both slow and fast. Re-charging once per day in 20-30 minutes is foreseen

• Ultra-fast charging (Power Pack) is designed as the solution for a 24/7 operation with charging of up to 600 kW.

For opportunity charging at specific locations on the line network, both roof-mounted pantographs as well as “inverted pantographs” at the charging stations can be used, depending on the customer’s system requirements.

While the design of an extended articulated bus version may be one of the options for the future product portfolio, double-articulated buses are not currently envisaged, nor is any trolleybus version. However, Irizar takes into account the development of the fuel cell bus technology, i.e. by participating in the Basque Hydrogen Corridor initiative.

Currently, Irizar e-mobility sells about 70% of its products abroad. Imanol Rego sees the very good prospects in the export business continuing into the foreseeable future. Further, the domestic market definitely shows potential as the number of electric buses is still relatively low compared to other European countries. “In the next 2-3 years, we expect a market potential of about 3,000 battery-electric buses per year in Europe.” In 2020, registration figures in the EU, Switzerland, Norway and the UK combined were around 1,600 units (2,272 including fuel cell and plug-in hybrid buses), currently accounting for less than 7% of new registrations of all city and interurban public buses, according to figures from the European Automobile Manufacturers’ Association ACEA. Imanol Rego points to the EU’s requirements: “According to the adopted ‘Clean Vehicles Directive‘, at least 22.5% of new city buses must be emission-free by 2025, and 32.5% by 2030. To implement this, substantial investments are needed, and the electric bus will play a very decisive role in this.”

From a single source

Irizar e-mobility sees itself as a system provider – its product range covers not only the vehicles themselves, for which components such as motors, batteries, on-board information system, climate management and doors, ramps, etc. are also manufactured in-house to a high degree. It includes the charging infrastructure and IT-based traffic management, too. This offers customers an all-in approach: on the one hand, customers can choose between a complete system including all related components, or pure vehicle purchases to be added to existing fleets on the other.

Today’s order book is in line with actual production capacities, but allows for certain flexibility in the production process. Currently e-buses are under construction for Schaffhausen, Genoa, Strasbourg, Orleans, Madrid, Vitoria-Gasteiz, and Burgas. Barcelona, Zaragoza, Frankfurt, Bern, Liechtenstein, and others will follow shortly. In addition, a framework agreement has been signed with the RATP Paris: https://www.urban-transport-magazine.com/en/e-bus-in-paris-framework-agreements-and-signed-contracts-including-a-first-major-contract-for-irizar/

Irizar e-mobility is currently introducing the ‚ie truck‘ – a battery-electric truck model for application, among others, in the municipal environment, e.g. for waste management, but also in the field of logistics. And this will certainly not be the last innovation Irizar may surprise the market with in the next few years.

Selection of further articles about Irizar at UTM:

Why not trolleybus with battere pack version? Or , more simple, why not trolleypoles for fast recharging e-bus model?