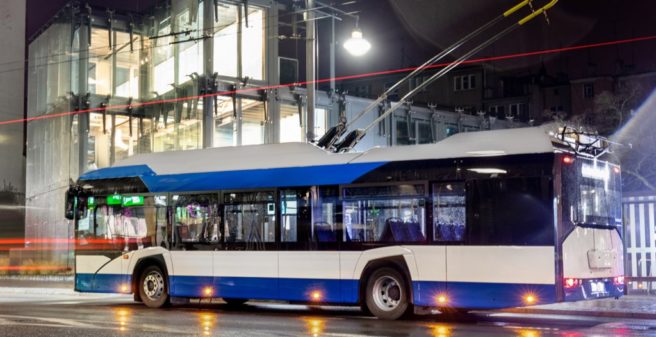 11 Solaris Trollino 12 trolleybuses will join the fleet of the Romanian city of Târgu Jiu. Delivery will be completed by early 2022. The contract has been signed recently, following a call for tenders launched by the Ministry for Public Works, Development and Administration. The total value of the contract amounts to nearly €4.5 million. The ordered vehicles will be equipped with a 160 kW electric motors. The tender for an additional 9 battery hybrid-trolleybuses is still to be completed.

In addition to the 11 low-floor trams already ordered from Stadler, Stadtwerke Augsburg has ordered a further four from an agreed option. (see also: https://www.urban-transport-magazine.com/en/stadler-wins-tender-for-eleven-trams-from-stadtwerke-augsburg/ )

Solaris received a first order from Hamburger Hochbahn (HHA) for 5 solo and 5 articulated buses each from an overall package to supply 530 electric buses.

The opening of a new branch line of Stockholm‘s Tvärbanen to Bromma airport planned for 13 December 2020, has been postponed on short notice. A bus replacement service has been implemented. Potential interferences with the flioght instruments of the nearby airport are the official explanation for the delay.

CAF was able to book further tram orders: DeLijn in Belgium converted options from the existing framework contract for up to 146 “Urbos” into a firm order for a further 17 trams for Antwerp, resulting in a total to 88 tramcars orders, 48 of which are for foreseen for the Kusttram. Utrecht will receive a further 5 seven-car trains, so that 54 such trains will be available there after delivery.

The opening of the seventh tram line T7 in Lyon, planned for 3 November 2020, has been postponed at short notice, a new date has not been communicated yet.

The first of the 156 Ebusco electric buses ordered by Connexxion/Tarnsdev Nederland arrived in Haarlem (Netherlands). 45 of these will be allocated here. The first vehicles (in a different livery) are also ready for operation on the R-Net lines in the Amstelland-Meerlanden region.

Alstom will supply 20 four-car “Metropolis” trainsets for the first 13 km long Goudi-Alsos Veikou section of the future metro line 4 in the Greek capital Athens, as well as signalling equipment and power supply.

In Istanbul the new, 16.7 km long metro line M7 Mahmutbey – Sisli-Mecidiyeköy has been in operation since 28 October 2020.

The first 4 of 10 new Solaris Trollino 18 articulated trolleybuses on order have been arrived in Bergen in Norway. The Trollino 18 ordered by Keolis Norge AS are powered by a 240 kW electric motor and equipped with 55 kWh traction batteries, thanks to which it is possible to cover a distance of over 11 kilometers without the need to connect to the catenary system. The batteries are charged while driving with the use of ‘in motion charging’ technology. More details syou may find here: https://www.urban-transport-magazine.com/en/solaris-trolleybuses-for-bergen/

In Vienna tram line O has been extended by 1.4 kilomter and four new stops from Praterstern to the new urban area Nordbahnhofviertel in Leopoldstadt. New terminus is „Bruno-Marek-Allee“ since Saturday, 3 Oktober 2020.

BVG Berlin will buy another 90 electric buses by Ende 2022  – 228 such vehicles will be in stock. Financing has just been secured by the Senate of Berlin.

Straßenbahn Herne-Castrop-Rauxel (HCR) officially presented the first of two BYD electric buses to the press – as part of a joint order with Bochum-Gelsenkirchener Straßenbahn (BoGeStra). See also: https://www.urban-transport-magazine.com/en/byd-starts-delivery-first-e-bus-fleet-to-germany-for-bogestra-bochum-gelsenkirchen/ . Start of operation on routes 321, 324, 328, and 329 is planned for late October.

Solaris Bus & Coach has received an order from the Romanian city of Ploiesti for 20 new “Trollino 12 IV” for delivery by 2022, to replace older Neoplan trolleybuses ex Lausanne.

EMT Madrid has ordered a further 50 electric buses: 30 will be supplied by BYD and 20 by Irizar. 15 BYD and 35 Irizar are already part of the fleet, the our reports here: https://www.urban-transport-magazine.com/en/new-irizar-e-buses-for-emt-madrid/ and https://www.urban-transport-magazine.com/en/chinese-electric-buses-for-emt-madrid/

Szczecin in Poland opened a new 1.5 km prolongation of existing route 3 between Las Arkonski and Rondo Olszewskiego on 25 July 2020.

Stadtwerke Bonn are testing an Irizar i2e electric bus on its line 630.

The first of the 13 Irizar “ie Tram” electric buses for the city of  Vitoria-Gasteiz has been arrived. The new ebuses will operate on a 10 km circle line starting in 2021, see also: https://www.urban-transport-magazine.com/en/vitoria-gasteiz-goes-ahead/

The tender process of 35 new, 38 metre long low-floor tramyways for  Magdeburg has been launched on 13 July 2020. 61 million EUR public funds have been granted to support the purchase.

The first two battery-electric buses in Würzburg will start revenue service on routes 6 and 16 on 13 July 2020. The  Solaris Urbino 12  Electric have a motor power of 2 x 125 kW and a battery capacity of 240 kWh. Operator is NVG Omnibus-Betriebsgesellschaft mbH.

The last of the 153 new light rail vehicles of the TW 3000 model supplied by Heiterblick to Üstra Hannover arrived on 30 June 2020.

Naples’ regional transport operator EAV has signed a framework agreement with CAF for the supply of up to 10 six-car trainsets for the 10 km suburban metro line between Piscinola and Aversa Centro.

Ebusco supplied a further 20 eBuses to Qbuzz for city bus operation in Utrecht.

The new tramway line currently under construction between Lausanne and Renens will be extended to Villars-Ste-Croix – the Swiss parliament Bundesrat has given his approval.

The opening of the third metro line (Zelenoluzhskaya) in Minsk originally scheduled for July 2020, has been delayed until at least end of September.

Vy Buss AB in Jönköping/Sweden ordered 49 high-capacity Volvo 7900 Electric Articulated buses. The new buses, which are scheduled to enter operation in Jönköping, in summer 2021, are part of the city’s next-generation investment in public transport.

in Bangkok the new BTS Green Line extension between Mor Chit station and Khu Khot station/Rangsit, was opened for public travel on 5 June 2020. This extension, which has four stations, was officially launched by Prime Minister Prayut Chan-o-cha.

Test rides over the entire 22 km line of the new Tram-Train system in Cádiz in Andalucia/Southern Spain have been resumed, the opening date September/October 2020 does not appear to be totally unrealistic anymore.

Wiener Linien is currently testing aSolaris Urbino 12 hydrogen bus which uses a set of fuel cells with a power of 70 kW.

State-owned „Kiira Motor Corporation“  has presented its first electric bus model called „Kayoola EVS“ in Uganda. In addition to a battery package solar-power cells are mounted on the roof. The first two vehicles will operate in the capital city Kampala. (ChrM)

Stadtwerke Rodgau in Germnay next to Frankfurt) are testing a Heuliez GX 337 elec, an “Iveco Crossway 12 LE CNG“ and a “Mercedes Citaro BZ Hybrid“ (fuel cell) are to follow soon, in order to assess future procurements. (ChrM)

Two important contracts have been secured by Solaris and its articulated battery-electric bus model Urbino 18 electric: The Romanian city of Craiova have just will get 16 of it in the first half of 2021. All are equipped with a roof-mounted pantograph for opportunity charging at various charging points which are also part of the supply contract. Motor power of the new e-buses is 240 kW. In addition, no less than 50 similar vehicles will be supplied to the Polish city of Krakow.

On 19 May 2020 BYD delivered a fleet of 20 units of BYD 12-meter pure electric battery buses to CUTCSA, the country’s largest urban public transport operator, in the Uruguayan capital of Montevideo.

Volvo will supply a further 128 hybrid buses of its 7900 Hybrid model to Belgium’s capital city operator STIB-MIVB by 2021. Brussels had already received 110 hybrid buses from Vovlo during past two years.

A completely tramway system was opened in the Chenese city of Tianshui on 1 Mai 2020. The 13 km long trunk route Wulipu – Tianshui Main Station is operated by bi-dircetional low-floor vehicles from Chinese manufacturer CRRC.

The public transport operator in Lublin ordered twelve Solaris Urbino 12 electric buses for delivery from November 2021 to April 2022. The total value of all the contracts for ordered electric buses with seven charging stations and after-sale servicing exceeds PLN 32 million.